How dare you ruin my City: The 116th Boston Marathon and it's Bombing

My Facebook friends and to a much lesser degree my Google + friends know that I am a native Bostonian. They know that I have a special place in my rude Bostonian heart for the Marathon and all the parties leading up to it. Some of my Navy friends will say that I've even gone home in April on leave just to watch it at the mile 20 mark with a group of very special people.

It was no major surprise that I would mention the Marathon once or twice last week leading up to all the excitement that was expected to go down this weekend. I was secretly hoping that someone would spill all the highly embarrassing stories so I could live vicariously through them and reflect on how much fun I was missing out on by being here in Sand Diego and not there where I belong. I'm a Hasher and Boston is my Home Kennel. There will never be a Kennel quite like it. Ever.

So I'm really sad that someone bombed Marathon, twice. Right at the finish line. Read a few articles from the Globe here. I'm more than sad, I'm angry, I'm enraged and I'm pretty powerless. Absolutely powerless. The rational person inside me says to ask if all the Hasher are accounted for, and I got one person telling me yes. I'm happy about that. I really am. But I'm still mad. It's not enough that they are all accounted for and hopefully unharmed. It will probably never be enough.

What bothers me is that I fell like I should have been there. Boston is where I truly ever belonged, I never had to pretend to be anyone else. I had a group of friends that accepted me completely flaws, crazies, anger management issues, ever changing body shape, employment status and everything else wrong or right with me. I had all that and I had a beautiful city as a backdrop. I understand and so do they why I left and they accepted that. Not too many of my friends back home understand why I never returned after getting out of the Service. So on top of all the rage I feel toward this unnamed Bomber I feel guilt for not being there.

Don't get me wrong I don't wish to have been maimed or injured like the people at the finish line. I wish I was where I normally would be. Passing out beer at mile twenty. I'm a Hasher whether I and active or not and that's what Boston Hashers do.  It's been the tradition since forever, not as old as the Marathon itself which is 116 this year but still pretty traditional.  I remember the last time I stood at mile twenty there was an announcement on the radio about us. I got tongue kissed in the face by old men with marathon ick mouth. We got to harass the Kenyans at they ran by. I heard Joey McIntyre (NKOTB) ran this year. I would have loved to see that shit.

What made all this debauchery said and unsaid so much fun was that Boston is a relatively safe city. I say relative because you have to consider the context. Now that's all ruined. Next year people will run the Marathon just to spite the terrorists. The free spirit of the race is gone. People will leave their kids at home next year. The Hashers might not even be allowed at mile twenty next year. You gotta admit we are strange. You can forget Patriots Day in New England. This is going to turn into a day where before we do anything else we'll have moments of silence and stories of triumph over adversity. The Boston Marathon was never supposed to be like this.

Yeah I feel pretty fucking violated. There is no nice way fro me to say that. I feel ashamed too. I am  busy  hiding out here away from all my friends and I hate to admit it family (gross-- family). I feel like I should have been there. I should have been there helping in some way making a list and coordinating people, just generally being of some use. But no, there isn't any action I can take. I can't even donate money. I'm broke.  The only thing I can do is complain about my own impotence in angry posts on Facebook: 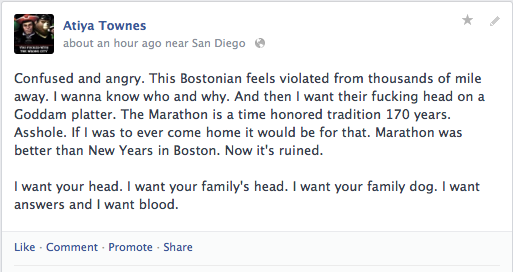 I think I said this when my brother was shot several years ago. It's not often I demand that level of barbarism. Also the Marathon only started in 1897 not 1843 as stated in my post. I added the Wiki Link above.

And I do want to know why? The so far the news sources haven't a clue as to who is responsible. Me personally I think it is a Domestic Terrorist. There is some speculation that it might be a random Saudi National, but I'm not leaning that way. Another part of ME speculates that it might not even be political.

Of course it could be political and then the real fear begins. It could be related to the wars. Americans are still the Infidels. Maybe the jihadist are just reminding us that we are not safe.The Threat levels we've all grown accustomed to since 9/11 will have a whole new meaning. Every middle eastern person will look like a suspect now. Let the racial profiling begin again.
Or it could be about taxes which ties in with Patriots Day like the article said. Massachusetts regularly gets an extra day to file taxes if Patriots day falls on the 15th. The American Revolution began in MA about taxes, but nobody had to die today to make that point all over again. If it's taxes, then, hey, I get it, no one likes taxes.

If the reasoning behind today's bombings was something different, I guess I need some clarification. What I'm not looking for is another Batman massacre. I'm hoping and wishing that the person who did this is of sound mind and has some kind of conviction or belief that what they did was right. I hope that this person had a series of goals that they they met today. Because otherwise today was pointless, and the thought of that makes me even more angry.