The Bean Counter: Strictly the news this time, because the news is funny. 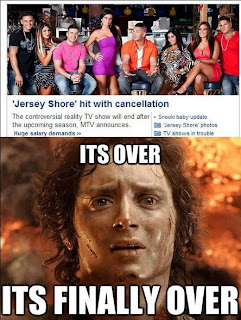 Quite Possibly the Greatest News OF ALL TIME: Jersey Shore is going off the air. +200

Pakistan is gearing up for another round of hate crimes. Starting off with framing a 13 year old retarded girl for Blaspheming. A man of a different religious background was seen putting pages of the Qur'an into her burn bag. Then he ratted the girl out so that she'd be put to death and her people would move away. I'm pretty sure at 13 girls blaspheme all the time in Pakistan (yeah if they have a death wish). Throw in the retard part and she's bound to be burned at the stake. -25

The Class of 1973 in some back water town decided that their 2012 reunion was open to all graduates except at one party where it was whites only. A few people bold enough to broach that taboo subject actually claimed it was justified because and I quote, "Blacks have the NAACP and BET. If they want to be segregated, why can't we have a whites only party?" Yeah well, we DO have all that and more. I'm pretty sure though we never told the rest of the the world they couldn't watch, contribute or participate. Ya'll get out from 'round here now... -40


Clint Eastwood goes all Dirty Harry on us at the RNC when he sticks it to the MAN. Really he just talks to an empty chair and tells himself to do unspeakable things to himself and Mitt Romney???? +10 for the unspeakable acts and -15 millions of responsible adults cheering on an old man talking to an empty chair.

Speaking of Republic National Convention Bill Maher gets a little impassioned about things when he makes this startling observation.

And while the fate of the country if not the world hangs in the balance of good and evil, Seal publicly tells soon to be ex wife Heidi Klume to stop sleeping with the help. Puts little blaspheming retarded girls and Dirt Harry's empty chair into perspective doesn't it. Why is this news??? -17

Then a Naked Prince Harry gets spotted in Las Vegas in a private dwelling or private club or some place PRIVATE. Dude it's Vegas it was bound to happen one day. I'm not even going to support a link for it. And you know why. Because I don't care. +5 You stay classy Harry.

But that's all on Earth, my new favorite nerd-gasm waiting to happen, the Rover Curiosity hopefully stopped all that music nonsense from last week and began moving again. The rover is off to see the wizard, or really some rocks off in the distance. The Engineers (the ones with the really BIG pocket protectors) have been playing with the America's most expensive remote control car and have finally picked a destination. +50 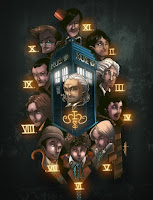 Wibbly Wobbly Timey Wimey Stuff: Yeah So Doctor Who Premiered in the US yesterday (Saturday) and guess who did not get to see it. This Geek FAN. You got it, yeah the Dog Log can't afford cable so I have to wait for Netflix. -40 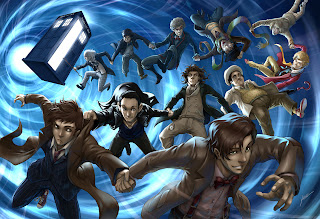 Then to make matters worse the latest Doctor, a Matt Smith basically said that he might not do it anymore. You pansy. You would say this after millions watch the premier last night. -27

Back in the real world, more specifically, home in Boston, politics gets SUPER dirty when Scott Brown throws up a website calling Elizabeth Warren a "fake indian" and more. Now I'm not a big fan of her either but I'm not going to waste tax payers money to shame her just because.  What a freaking waste -19

Who said Boston was stuffy? See, we get nasty like everyone else. +5???

Speaking of dirty. How this is a good thing, I have no idea, but a creature I've only heard of and have never seen washed up on the shores of Mississippi in the aftermath of Isaac by the hundreds. What ever a nutria is people are actually glad to see them dead. Something about eroding the marshlands. Grossness but YAY!?!? +14
-70 Because a dead carcass still smells like well, dead things.

So how is the state of the world today? I'm going with 70 since I can't do math very well. At least it's not a +3 like last issue of the Bean Counter.