No Place for Old Men

So I have a friend taking up prime real estate on my couch for an undisclosed amount of time. As I was going over my day with him (most likely a new nightly ritual) the topic turned to old TV shows.


The Classics came up: I dream of Jeanie, I love Lucy, The 1960's version of Batman. Clearly this trip down memory lane was more of a retrospective. Like if these shows ever came on now would I watch it?
The Answer would be a resounding yes.


I never got much into I love Lucy not because she wasn't funny. Because she was, and she is a pioneer to this day of women in Slapstick comedy. No my reason was a little more basic. The majority of her shows were in black in white.


That's pretty much the reason why I didn't like the early version of Bewitched, even though Dick York was way better than Dick Sargent. Also the  same reason why I watched Mary Tyler More but the Dick Van Dyke show was way better. Or why I never sat through an entire show of the Andy Griffith show until it came in color.


To a little kid watching reruns in the afternoon color was very important. I loved the Monkees, I know all the lyrics to "Last Train to Clarkesville" (don't ask why I'm proud of this, just don't) mostly because it played almost every episode and because it was in color. I loved the Brady Bunch, What's Happening Now, The Partridge Family and a bunch of other shows that was off the air before I was even born all because they were in color.

But that's not the point of this blog, so I have to find my way back from this tangent I'm on.


He mentions that he liked watching Batman when he was younger because it was SOOOO Coool. Now he watches it just to figure out the plot before Batman does. Here is where I jump in and say I'd watch it just for the crazy speech patterns.
Then the conversation devolves into how many different ways Dick Grasyon can say Holy Smokes or something else Batman!!! Or Dastardly Deed. Come on, who in what era has ever said "someone has to stop insert villain here from succeeding in his dastardly deed? I honestly don't believe that people actually spoke that way in 1966.


Then after a moment I think about how Adam West still has a career in entertainment after all those years, still playing the same shtick. It's funny to me that he portrays himself as this doddering old fool. Kind of a cute very offensive but completely harmless old man.

You know Adam West might just be a genius. That or there is a niche for silly old men. Enter William Shatner.

Hey, back in the day Captain Kirk was the image of sexuality.  I have for no good reason, sat through too many documentaries about the original cast of Star Trek.

Here and there you'd catch a smattering of annoyance when a cast member talked about  how much they sexed up Captain Kirk. As a little Trekkie in the making (more aptly I loved all things space) I could have cared less what the heck Kirk had on or didn't have on, as long as the Enterprise won at the end of the show. However, they still sexed up Captain Kirk, and I'm pretty sure he kissed every female on the show except for Spock's girlfriend. 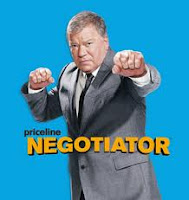 But William Shatner is just like Adam West a silly old man making silly amounts of money being silly and old.


Maybe they found their Blessing. I can't fault them for having a formula that works.


One thing is certain; they aren't sugar daddy material. Not like these guys, well not in my book at least. But there is a place for them. And where ever that is I'm probably giggling.