Tonight I decided to forgo the hot lines and went looking for a new AA meeting.  I got on the website and searched out one Downtown. There is one closer to my home but I went last week and the Secretary gave me the heebegeebees. But in a pinch I'm always welcome as is the way in AA.  I really wanted to go tonight even though I promised I'd be on the phones all afternoon into the night.

I took Chewy out for a really long walk this afternoon in preps for leaving him home alone. Got back just in time to run late. Never the less, with directions save to my smart phone I trotted off to the bus stop.

In an uncharacteristic moment of zen, two #10s pass by. Normally you'll see two 7s followed by one 10 bus. This does not bode well for Ms. Townes. The meeting starts at 6:30, it's 5:45 already and I have to change buses once. Google said the trip will take 53 minutes, yep, no bueno.

Because I know the first leg of my trip will take a while I break out my Ipod and read some book I have saved on it. Some preggo heroine is being attacked by some angry magical being. For this heroine, it's all in a days work. No worries. Yeah for her, for me I just missed my stop.

On foot I decided to consult my smart phone again to make sure I'm at least close. Some how I decided I was and began huffing it in the wrong direction. Backtracking to the correct street I'm now wondering why I can't find the building. Well because I'm on the right street, which is good, but ten-twelve blocks away, which is not good.

It's now 6:20, I'm just going to crash the party late. I managed to get some good news from a hostess at a place called Ravioli's. They said that I am about a brisk 14 minute walk away from the street I want. By 6:40, I'm so close I can almost smell the bad coffee, but I have to pee so bad I need to stop.

Hindsight is always the first thing on my mind, I should have asked to use the facilities at Ravioli's. I'm sure they would have let me. The place was a little out of the way from the center of Downtown SD. Repeat business you know... Albertson's appears out of nowhere. You gotta love supermarkets and their non public bathrooms, that all the public uses. The good news is it's only a block over from where the meeting SHOULD be. The bad news is that it's now 6:55. I might as well give up the ghost.

Well it is a supermarket so I'll pick up a few things.

On the way to the nearest bus going back towards Downtown center, I actually see this place. It's a nice one, I'm really sad that I missed it. I don't think the coffee would have smelled bad either. I mean I can't drink that stuff but I can enjoy the smell. There's a few people standing outside the place when I pass by. The meeting has been over for at least ten minutes but I'm afraid (there's that word again) to approach them. Seriously it's AA I can admit that I'm a member, that's one thing, but to walk up to a random stranger and say "hey did the AA meeting just let out," is another.

I sort of feel like I'm violating their anonymity, by asking them so I walk by, continuing to scope the place out as much at I can before I head back home. Hindsight again says I should have toughed out the creepy secretary and went to the closer meeting. It not only started later so I would have made it. I would have gotten home in enough time to actually get on the phone tonight.

But I'm not done. Determined to get my AA on for the night, I decided to log on to the open recovery chat. Where I am immediately harassed by someone one for saying I need a new sponsor. Not to insult my sponsor but she and I have not talked in a very long time. I said this much and got my ass chewed for saying I need more guidance.

Someways I can see how I may have provoked her. Other ways I'm not at fault. I've maintained my sobriety for almost six months. I'm proud of that, I take offense to some random person who admits that they drank tonight yelling at me for wanting to fire my sponsor. One I'm not firing her. Two the last thing she said to me was good information so there's no need to fire her. The point I made and this "person" seemed to miss was that I need more guidance. I'm not going to sink to her level though. I told her I forgave her for trying to irritate me, and proceeded to ignore her. She eventually left the chat.

Which brings me to this: Why argue with people you don't know? Why take so much pleasure in causing someone else discomfort. What does one gain?

My Alkie brian wants to dismiss her just because she'd been drinking. Thus I get to say "ha I'm better than you," but the real problem is not two alkies arguing. The real problem is two people who have no ties trading insults over the internet. 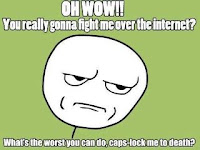 I've got a picture for that ...
The whole AA experience tonight was ruined because of piss poor internet protocol.  I truly needed to make a meeting today. I lost my temper with Chewy. I yelled at him and the poor guy cowered. I've been frustrated over not making enough money lately, and I haven't been able to write, and I missed class on Wednesday.

I was/am on my own last nerve. When I get like this I need to reach out. AA is a ready support system, even if you don't always get what you want. 99.9% of the time you'll get what you need.

So the plan after fighting the VA tomorrow part 3, I shall find the nearest AA meeting and get my fellowship on.

Tonight though I'll pray for Serenity.
Posted by Unknown at 1:34 AM