What Am I Reading Wednesday (On Friday): Fifty Shades Darker by EL James 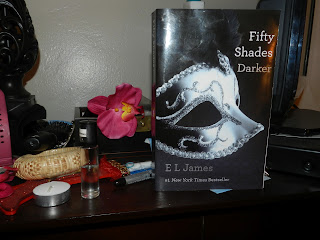 I wanted to get a jump on Fifty Shades before the summer was out so I’ve got book two ready to go.
Anastasia and Christian are back with Fifty Shades Darker. Last time we left off Ana broke up with Christian because he was too much of a soulless ginger. I’m kidding really I am. But she did leave him. You can believe though, like any unhealthy relationship, she took him back.
I have to say that Ms. James did a great job on the heart break. Shit, I felt just as miserable as Ana for about five minutes. You know the amount of time it took for me to realized there was still sooo much book left.
So she took him back. He demands she move in with him and things don’t go all happily ever after. We’ve got Mrs. Robinson, a deranged ex-sub, a serial sexual harasser, and of course the Goddess and the Librarian.
I was not as impressed with the inner goddess as much as I was in the first book. She comes off as a horny teen, sort of campy and predictable. The Librarian thought comes off a little stronger in the book. It must be a trade off.  I’m guessing is Anastasia’s evolution or some such. I’m excited to say that I’ve already gotten the last book in the Trilogy, so end of her growth will be highly anticipated.
Christian, my word, you evil Ginger you! He also undergoes some changes here. He learns the word compromise. Not much because let’s admit it it’s Christian. Millions of women around the world would not be reading this book if Christian all of a sudden did a 180 and become Mr. Sensitivity. (Queue Ralph Tresvant {I’m gentleman at heart}) He’s still domineering but somehow it got into his unusually thick sex muddled skull that if he wants to keep Ana he needs to give a little slack on her leash. Leash Get It *wink.
I’m going to give a little spoiler only because I’m like the last person to read the Fifty Shades series. Christian has got to be the most manipulative man in the world or he really needs that shrink they keep mentioning. Holy Cow, does he ever pull a stunt. So somewhere around 3/4 to the end, Ana once again is asking for space Christian just can’t give. Instead of getting mad and having hot sex in the elevator, he panics and takes a submissive position on his knees. Well Fuck Me Gently With A Chain Saw. I did not see that coming at all.
Had I been in Ana’s place I honestly don’t know what I’d do. Ms. Townes held her breath while reading this part. Well done, and I applaud you Ms. James for that brilliant piece of  role reversal and for your character because he told you to write that. Bravo. Bonus points for giving me yet another reason why I’ll never date a red head. Christian is King Unflushable
Because this story so far has been all about the relationship between Christian and Ana I found it very interesting to weave in a few more stories outside of the relationship. Ana’s boss the lecherous pig lives up to all the names Christian called him. Mia, Christian’s sister seems to have wound her way into the story as well. We also get a little more depth out of Mrs. Robinson. What a thing of work she is! I like it. I like that life around the two main characters has expanded and grown so that the story, still over the top, becomes a little rounded.
I can say that this second book will get two thumbs up. I can’t say there will be a vlog this week though because Ms. Townes is truly sick again and has the worst voice in the world and a horrible break out of acne. I can deal with bad hair but acne and no voice. I don’t think so.
Next week I’ve got another one  of my favorite authors coming up. Dakota Cassidy with Accidentally Dead Again. You guessed it more vampires. This time the hottie is in sequence.
Posted by Unknown at 5:04 AM