What Am I reading Wednesday (Saturday): Accidentally Dead Again by Dakota Cassidy 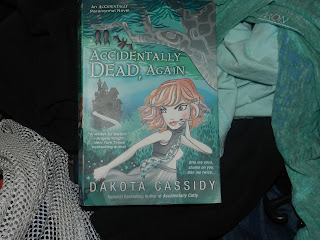 The Accidental Series is back with Wanda Marty and the resident Perma-Chip Nina. They are saddled with not one but two newly turned vampires one of which is Nina’s long lost sister.
First off let me say that the first five books were great. This one sort of feels like Ms. Dakota Cassidy and her characters are just going through the motions. Check out her other books here. They are way better.
The story line is solid though with, an under cover agent, and the appearance of Nina’s long lost sister, the reappearance of all of our other favorites and the surprise appearance of some others we’d rather do without. Even if, we’ve already done the whole sister thing with Accidentally Demonic, two books back people, check that one out, the book was kinda of a new take.
What’s new about this latest installment is obviously the FBI agent, turned after picking up a some hottie at a costume party. But we’re not judging him on his promiscuous habits with women. No way, we’re judging him on his choice in clothing. Trust me there is nothing sexier than a man in sequence. Make it day old sequence and we have a problem. Granted it was a costume party, it’s just that he then spends several days in the outfit. Poor sod.
Nina, the wonderful bowl of happy kittens, she is, gets to have a go at family. Her unknown sister (Phoebe) shows up at OOPS looking for a slumber party buddy and ends up part of the story, as she also get turned on the spot. We then get to read the many varied ways Nina and family can make Barbie more plastic. Talk about a bite in the ass.
I could have done without a good portion of that. It all seemed sophomoric, petty and frankly over done as if  Ms. Cassidy was reaching.
Agent Sexy Pants too comes off a little flat. Lucky for him (Sam), his current mission was supposed to be cake right? Right around the time he gets to put on him man pants, he also grows some balls and a conscience. But Phoebe fixes that since of course Sam and Phoebe are fiercely attracted to each other. Hot vampire sex, I'd rather get my ears cleaned.
Okay you know what, I’m going to stop right here. If I weren’t reviewing this book I would have left it at a “Meh, she could have done better.” I’d have been right. I’ve read the other books in the series and I was impressed with the whole concept. Chic women sort of like Sex in the City, but edgier, dealing with paranormal life altering changes and still trying to be fabulous. It was great the first five times. There is only so far you can go until the shine wears off.
Ms. Cassidy, the shine has worn off. Put OOPS and the gang to bed, there’s only so many accidents this fan can take.
NO THUMBS UP: Color me unimpressed
Sadly my voice is still shot so no video this week either. That's probably a good thing since I'm bashing this book.

Next week: All The Time In The World A Time Traveler's Story
Posted by Unknown at 9:43 PM