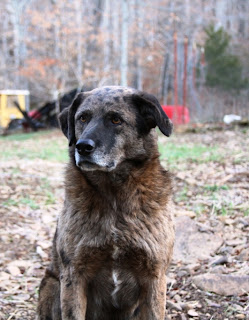 And here's my story:
Alpha


Alpha lost the pack to his son fair and square. Now that he'd found a human he was safe, and warm. He's final days would be here.

As Alpha's last sun set, he thought back on his sire, the new Pack Leader. He felt he would be a great king, and he was proud of him.

A cry of the utmost pain and suffering rang through the woods as Alpha struggled to sit. Loud and long enough for it to fall on old Alpha's ears, his son!

Adrenaline rushed through his old body, tensing itself to spring into action. Then his heart skipped two beats.  At his son's  desperate cries Alpha remained sitting, then he lowered himself completely to the ground. When he closed his eyes for the last time, he heard the erratic beating of his own heart and the howls of his son's anguish. Then nothing as he exhaled for the last time.

Okay on twitter look for #FridayFictioneers or @Massion_Woods. I'm on Twitter at @AtiyaWTownes. Join the fray folks.
Posted by Unknown at 1:10 PM